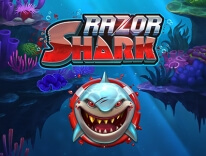 Some of the best promotions are those that are available for a limited time and pits players against each other. This is exactly what you can expect with the ‘Razor Shark Tournament’, an ongoing promotion that will run until July 27, 2020, at 5:59. If you have opted in the promotion a few days or ago or you want to catch the excitement before it ends, then now is the best time to check out LeoVegas and play for the biggest win!

The Prizes and Schedule for this Promotion

This is Week 5 of the ongoing tournament from LeoVegas and it’s waiting for your participation. The tournament officially started last July 24th and will end this July 27th at 5:59. For this promotion, there are 7 prize levels consisting of ranks from 1 to 90. Your objective is to place on a higher rank or if possible, end the promotion as the ranked 1 player of the tournament. Here’s a look at the cash prizes that you can collect for each rank that you will accomplish.

Here’s How to Start the Adventure

If you’re interested to play, you need to login and proceed to the promotions page of LeoVegas. Compared to other contests out there, this ongoing promotion from LeoVegas is based on the net winnings. This means that wager is deducted from your slots win to come up with the net win. Once the wager has been removed from the amount, a point system is followed to identify the points.  In this promotion, a point is credited to your account for every INR‎100 won on Razor Shark slot game. Throughout the duration of the promotion, you need to play the game and collect wins to earn points. The bigger your wins, the bigger the chance that you can collect points that can push you up the leaderboard. With just one day remaining, now is the right time to visit LeoVegas and play this exciting slot game.

If you earn enough points and you land in the leaderboard, you need to claim your rewards at the ‘My Offers’ section. LeoVegas will credit your prize within 72 hours after the completion of the promotion. The nice thing about this LeoVegas promotion is that cash prizes are not subject to the site’s standard playthrough requirements. So if you’re looking for a new game to play and a contest you want to explore, then this promotion is perfect for you.

Written for onlinecasinogamesindia.in by Vihaan Agarwal - 27-07-2020