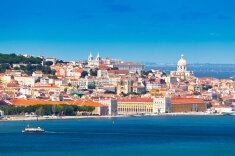 Arguably one country that is showing considerable traction in the online gambling industry, is perhaps one that many industry insiders would not have predicted. Indeed Portugal, over the last couple of years is a market that perhaps struggled initially, but is now starting to demonstrate that it could be a key market in Europe over the next couple of years.

This has been shown by the significant figures that have been recorded during quarter one (Q1), following new releases which show that the Portuguese are spending €28 million every day on some form of online gambling.

It is a remarkable feat considering that there is very little choice for customers, with key European sportsbooks and gambling sites, still reluctant it seems, to apply for a license.

As a result, it has led to the emergence of a number of native sites to launch, though these have proven to be successful over the last year.

The launch of new iGaming sites in Portugal - such as Casino Portugal, has led to each of them embarking on extensive recruitment drives in order to make sure that they can adequately compete with the rest.

Although there are a couple of major operators in Portugal, such as 888 and Betway, which have both secured licenses for the country, a lot of emphasis is on pushing local brands to make them as big as possible.

Because online gambling only launched legally in 2016, it means that it is still relatively in its infancy and as a result, participation did not start to pick up until a few years later, especially due to a lack of awareness because of marketing limitations.

Registrations on the rise over the last year

It has been somewhat of a landmark year in the country so far for the online gambling industry, which is starting to witness considerable increases in registrations at sportsbooks and casino sites.

Indeed, this has been reflected by 215,600 recorded registrations in the first quarter of 2022 - almost the same as the previous quarter. This translates to 66.6 per cent of this figure being aged under 35. In the same period for a year previously, there were 113,900 new registrations, which demonstrates a considerable increase year on year and indicates that online gambling is becoming particularly popular.

What is impressive, is that Portugal only has a population of 10.9 million people, while the average monthly salary is just shy of €800 - one of the lowest in Europe.

However, over the last year, there has been a major influx of new residents in Lisbon, especially from other countries around the world and Europe in particular - mainly being digital nomads or remote workers, on much higher salaries.

This is perhaps, one reason for a considerable spike in gambling revenues for the country and future trends show that this could well continue beyond the next couple of years, with more and more technology companies from the US moving into the country.

Written for onlinecasinogamesindia.in by Vihaan Agarwal - 19-07-2022